The following information is from John F. Barnes, PT. He is considered by many to be the leading authority on Myofascial Release. His explanation of this tissue is one of the most comprehensive that I have read.

WHAT IS MYOFASCIAL RELEASE?

Myofascial Release is a very effective hands-on technique that provides sustained pressure into myofascial restrictions to eliminate pain and restore motion. The theory of Myofascial Release requires an understanding of the fascial system (or connective tissue).
The Fascia is a specialized system of the body that has an appearance similar to a spider’s web or a sweater. Fascia is very densely woven, covering and interpenetrating every muscle, bone, nerve, artery and vein as well as all of our internal organs including the heart, lungs, brain and spinal cord. The most interesting aspect of the fascial system is that it is not just a system of separate covering. It is actually one structure that exists from head to foot without interruption. In this way you can begin to see that each part of the entire body is connected to every other part by the fascia, like the yarn in a sweater. 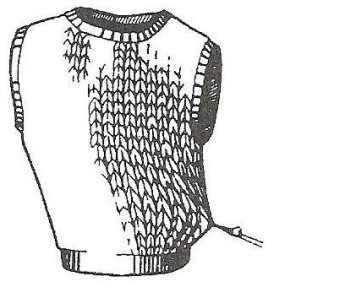 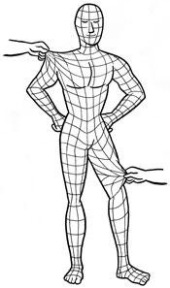 Fascia also plays an important role in the support of our bodies, since it surrounds and attaches to all structures. These structures would not be able to provide the stability without the constant pull of the fascial system. In fact, our bones can be thought of as tent poles, which cannot support the structure without the constant support of the guide wires (or fascia) to keep an adequate amount of tension to allow the tent (or body) to remain upright with proper equilibrium.
In the normal healthy state, the fascia is relaxed and wavy in configuration. It has the ability to stretch and move without restriction. When we experience physical trauma or inflammation, however, the fascia loses its pliability. It becomes tight, restricted and a source of tension to the rest of the body. Trauma, such as a fall, whiplash, surgery or just habitual poor posture over time has a cumulative effect. The changes they cause in the fascial system influence the skeletal framework for our posture. The fascia can exert excessive pressure producing pain or restriction of motion. They affect our flexibility and are a determining factor in our ability to withstand stress and strain.
The use of Myofascial Release allows us to look at each patient as a unique individual.

Cellular level
At the cellular level, the most important components of fascia are the collagen and the ground substance. Collagen is the main component, representing 40% of the body’s fascia. Fascia holds water in like a sponge and if put under duress, it can dehydrate and become hard, gel-like and sticky. As a side point, remember that 70% of the body is water and 70% of the muscle (which is broken down into fascial sheaths) is also water. The ground substance which surrounds the collagen fibers is made up of GAGs (glycoaminoglycans) and about 70% water. These two components help to maintain something called the critical fiber distance between the collagen fibers, thus serving as a kind of lubricant. 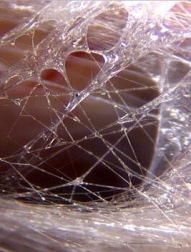 When dehydration of the fascia occurs because of physical and emotional distress, water is pushed out of the tissue. Basically, dehydration turns this lubricant – like solution to more of a gel-like glue. Hence the critical fiber distance is reduced and the collagen fibers don’t glide as smoothly. This increased fascial compression also places excessive compression of the capillaries. Poor cardiovascular flow occurs and healing is greatly reduced. The result is, then, that extra fascia (of a shortened and thickened nature) will be laid down, all resulting in faulty movement, decreased cellular communication and poor posture. The final outcome is pain.
Myofasial work strives to reverse this pattern by rehydrating the fascia to a solution-like state resulting in improved movement and posture, and reduction or elimination of pain. As well, the collagen fibers – as part of the fascial network – tend to rearrange and organize to an improved pattern.

Fascia and change: The piezoelectric effect
How these techniques change the body, both structurally and posturally, is due partially to the piezoelectric effect. Molecularly, the myofascial system is arranged as organic crystalline. When pressure is applied to a crystal, it produces a small electrical charge. So when you apply myofascial work, you can generate electrical fields. It is probably here where the nervous system gets involved. As well, tissue that is too tight and under stress is not only dehydrated but also has a lower electrical potential. In short, the tissue moves poorly, and with less strength and power.
When you apply myofascial work, you are increasing the electrical potential which attracts water molecules, thereby rehydrating the ground substance. This is often referred to as the motility response of the tissue, which can be one of the first effects of myofascial release.
In addition, the techniques used in this work help to rearrange and organize the fascial network – therefore, the collagen fibers, as well. This reorganization to a better, more moveable tissue occurs through a higher brain function. This involves other body systems and incorporates a very important process called integration.